Background
The ASEAN Integration Report (AIR) 2019 presents the progress and achievements in ASEAN economic integration since the adoption of the ASEAN Economic Community (AEC) Blueprint 2025 in 2015.

A flagship, periodical, publication of the ASEAN Integration Monitoring Directorate (AIMD) of the ASEAN Secretariat, the inaugural issue of the AIR was released in November 2015, ahead of the official launching of the ASEAN Economic Community (AEC). Building on the structure and analysis of the first issue, the AIR 2019 provides an analysis of ASEANs macroeconomic landscape in recent years, as well as a comprehensive assessment of progress and achievements of ASEAN economic integration since 2016 in the context of the AEC Blueprint 2025. It also presents a thematic chapter on the 4IR, which has been identified as one of the most important megatrends in ASEAN, and closes with conclusions and policy recommendations.
After the release of the electronic version of AIR 2019 on 1 November 2019, in time for the 35th ASEAN Summit, the ASEAN Secretariat will organise the official launch of the AIR 2019, at the ASEAN Secretariat, Jakarta, on 26 November 2019. The event will provide the opportunity for the ASEAN Secretariat to socialise the highlights of and recommendations from the Report, informing the public of progress of ASEAN economic integration over the last four years.

Objectives
The objectives of the official launching of the AIR 2019 are threefold:
(1) To update the public on the progress of implementation of the AEC Blueprint 2025 since its launch in 2015, based on the AIR 2019;
(2) To deepen understanding amongst ASEAN stakeholders, and the public at large of the key dimensions of ASEAN economic integration for a more informed policy discourse; and
(3) To facilitate interactive exchange of views amongst ASEAN stakeholders on ways in which the implementation of the AEC Blueprint 2025 can be further 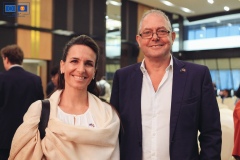 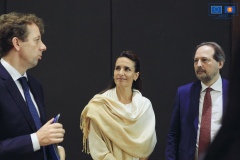 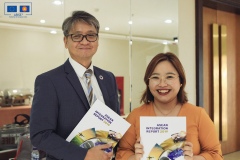 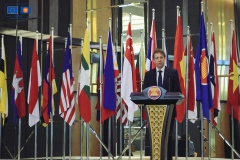 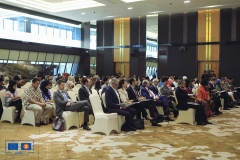 Virtual Event
Back to Top