The ASEAN Customs Transit System (ACTS) Partnership Building Event was held for the private sector stakeholders from Laos PDR on the 21 July 2022. This follows on from events organised for Singapore, Malaysia, Thailand, Cambodia and Vietnam and is the sixth such event organised by the ARISE Plus team. The event is part of a dedicated effort to ensure private sector stakeholders across ASEAN Member States are aware and are well informed on the practicality, benefits and advantages ACTS has to offer.

A total of 34 participants coming from major logistic companies such as DHL, Tiong Nam and others participated in the three-hour event which highlighted that the multiple benefits of ACTS are to freight forwarders, customs brokers, transporters, trading companies and manufacturers. The participation of banks such as Agricultural Promotion Bank and Lao-Viet Bank demonstrated strong interest in the potential of ACTS. The ARISE Plus technical experts shared information on the key aspects of ACTS through two sets of detailed presentations on the different steps for registering as a principal trader, the terminology used, common practise, application processes and technical aspects of ACTS.

Participants showed a lot of interest during the Q&A session. with questions raised, on issues such as the interface between the Laos national customs system and ACTS. During the session it was highlighted that ACTS is a digital system that facilitates transit and reduces costs. Furthermore, the advantages of ACTS to Laos PDR, as a land locked nation gaining access to major seaports in AMS was also extensively discussed. ARISE Plus encouraged the private sector stakeholders to take advantage of the cost-free services ACTS currently has to offer.

A strong outcome of the workshop was the request from 8 participating organisations for follow-up workshops offered by ARISE Plus and the ASEC ACTS Central Management Team indicating their commitment to implement the ACTS.

Previous ACTS Outreach events and follow up workshops have resulted in increased usage of the ACTS for the transporting of goods through routes such as from Singapore to Vietnam via Malaysia, Thailand and Cambodia and has led to a wider upward trend in the use of ACTS

ACTS responds to the call for digitalisation and offers many advantages such as seamless movement of goods, single vehicle use, shorter transportation time enhancing regional trade all resulting in lower transaction costs.

The joint commitment for the utilisation of  ACTS as  trade facilitation mechanism by national government agencies such as customs authorities and the private sector is evidence of the committed partnership and trust which are fundamental to strengthening  the ASEAN internal market. 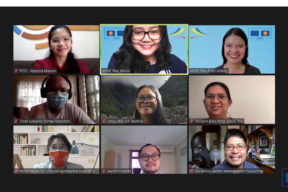